How Many Environmentalists Does It Take To Change a Light Bulb?

A quick, simple way to reduce your carbon footprint and save money on your electric bill is to replace incandescent light bulbs with LED bulbs. LED (light emitting diode) bulbs used to be too expensive in quantity, especially without incentives or rebates from the electric utility. CFL (compact fluorescent lamp) bulbs were introduced instead. CFL bulbs are more efficient than incandescent and less expensive than LEDs, but now have too many drawbacks to be a rational choice over LEDs and are being phased out.

First, and a very bad first, CFLs contain mercury. Other issues are their physical appearance, color performance, poor fit with existing and new luminaires (light fixtures), and their inability to dim easily.  With all these negatives, and more, New York and just about every other state plans to ban CFLs and similar lights in state buildings.

Depending where you live will determine how to dispose of them. In Dutchess County, bring CFL bulbs to your local Home Depot or Lowes for free recycling. Also, bulbs are accepted one of Dutchess County’s Household Hazardous Waste drop-off events, or by contacting American Lamp Recycling.

Fortunately, LEDs have become a good option. Their price has dropped due to lower manufacturing costs and government subsidies and are now competitively priced with CFLs. Here’s why you should not hesitate to use them. Incandescent bulbs waste 90 percent of their energy as heat, using only 10 percent for light. Even CFLs emit about 80 percent as heat. LEDs emit very little heat and therefore require 75 percent less energy than incandescent bulbs.  Because LEDs emit little heat and don’t have a filament that will fail, they last up to 25 times longer. If you’ll pardon the pun, LEDs are the light at the end of the tunnel for saving on your electric bill.

The brightness of an incandescent bulb is indicated by wattage. The higher the watts, the brighter the bulb—and the more expensive your electric bill was. The problem is, watts measure electricity consumption, not brightness. That is measured in lumens or “lm.” A rough conversion: a 100-watt incandescent bulb puts out 1600 lumens, an LED bulb that puts out 1600 lumens is a 16 to 20 watt bulb. It adds up in a hurry if you’re replacing all the bulbs in a house.

But you’ll want to get the color “temperature” you like. LEDs address the CRI or color rendering index. Your local bulb source may only have cool white, but LEDs are available in the entire range of visible light. Warm light is often preferable for house interiors. Cool white is best for psych wards, jails, and work areas. Many artists prefer cool white because it is closest to natural light. Another issue: If you want a dimmable light, buy one labelled as such. If you are replacing a bulb that has a dimmer switch, it may not dim an LED. Current dimmer switches are both incandescent and LED compatible.

It is hoped that this shed some illumination on how to decrease your carbon footprint and electric bill.

For more reading on the topic: 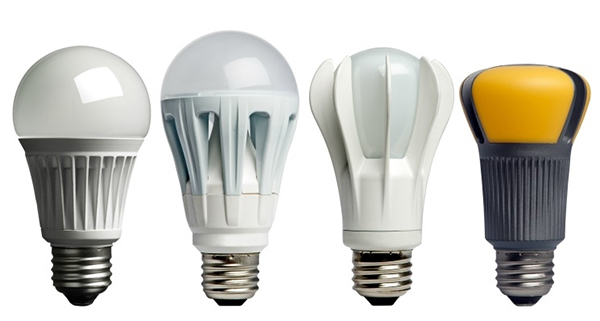 A range of LED bulbs, designed to last many years and produce bright light at low energy. Now they are affordable, too.